Schedule Task not converting to Active

Previously, when the date of a scheduled task came up, the task would convert to Active and appear in the Next Items list automatically. But as you can see if you look closely in the picture, I have a task scheduled for late last year (2015) which has not activated. 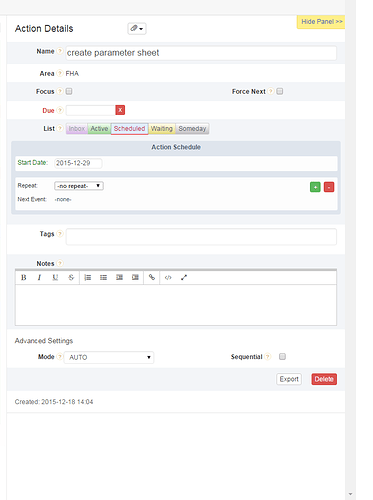 I’ve noticed this behaviour a fair amount lately, where I have to manually reactivate a scheduled task. This was a problem noted in this idea thred

Thanks for reporting. I will do some tests tonight. I use this feature quite a lot, so I know it’s been working. If it’s not working it would have been caused by some recent update. We will check!

We are having trouble reproducing this behavior. Can you confirm you are still seeing it?

Eventually we will make this happen automatically, but in the mean time it’s always good to start your day in GTDNext by hitting the refresh button if you leave it open all night.

I’ve been trying to note this occurring again, but I have not encountered it recently. Perhaps the problem was solved in solving something else or with a regular update. Thanks for looking into it though. Sorry it ended up being a bit of a red herring.

It look like it’s not working for me. It appears that when a task is scheduled it is not changing to Next Action when the due date is achieved. (Project tasks and recurring tasks work fine.) On 3/21/16, I created 2 scheduled tasks with a due date of 3/22/16. When I signed in to GTDNext on 3/22/16, they both show as “due today” in Projects & Actions, however they are not flagged as Next Actions. See screen shots below. I thought they would both show up in my Next Actions list. Is this how it’s supposed to behave? 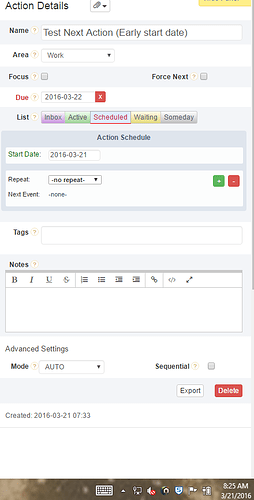 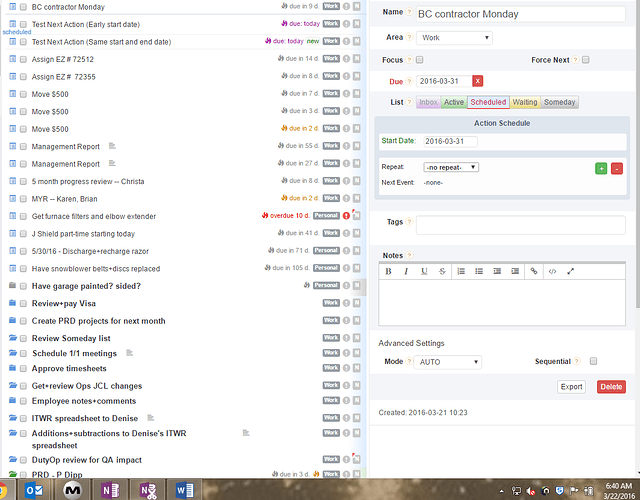 I have tested this again (several times) and my schedule tasks always turn to next actions on the start date.

I wonder if one of the bug fixes we did to scheduled happened after you created your items and somehow they are not triggering.

Can you try a test and make an scheduled action with tomorrow as the start date and see if it works? If it does, we may need to have you update your other older scheduled items. I see you have quite a few, so apologies if that is the fix.

Let me know how it goes.

It worked fine this time. Thanks for checking in with me. I’ll make whatever updates I find I need to.

Okay, good. That supports my theory that it is working correctly now. There may be an issue with older recurring tasks.