In undertaking my weekly review I noticed a Task with the following attributes:

So - apart from the fact that I have failed to do something that I should have - I do not understand why this task is not showing under my ‘Focus’ menu item? Have I misunderstood how these tasks should bubble into my line of sight?

I forgot to add … the owning project is in an Active state and I can see no reason why this would inhibit the Task from appearing on both the next (as the dates have past) and Focus (as it has Focus set) lists? 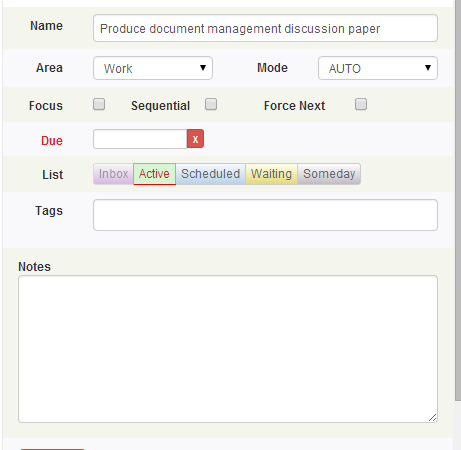 Agree. Totally unexpected. Chances are it is a pure bug.

One more thing. I may have said this before - in that case please forgive me for repeating, but I advise strongly against introducing “inconsistencies”, i.e. when some given feature can behave totally differently under different conditions.

Although it is good to have that option, I think it is unwise to make double use of the Focus flag for it. There are so many other and better ways to show people these “new” tasks than to be able to set the Focus flag manually for them. One is to simply show them in Focus by default - I think people generally want to see them. Or make it a user preference to do so. Or, if people really need this option on a per-task basis, provide a separate feature for pre-programming focus and allow people to use that feature in a consistent fashion under all circumstances when such pre-programming could be relevant, not only for scheduled tasks but also, for example, if immediate focus is desired for a sequentially dependent task as soon as the preceding tasks have been completed. The underlying need would be the same under those conditions.

Also, it is a great pity not to be able to focus a scheduled task in the normal sense whenever you have decided to review or double-check something about it later today (to double-check or verify the date, for example). This “normal” focusing function (“show on focus list now”) is lost when the feature is “hijacked” for the other pre-programming purpose. And you definitely get an element of confusion when it behaves differently, unexpectedly.

Have I misunderstood how these tasks should bubble into my line of sight?

Thanks for the report, we will investigate. When the scheduled item came date occurred it should have been been switched to your active list and on focus list.

I’m having a similar problem - and I’m not sure if I just don’t understand the way ‘scheduled’ items are supposed to work. But I’ve not been able to have scheduled items appear in the next actions list - at all. If I create an item in the inbox and then set it to ‘scheduled’ - it takes on today’s date as a scheduled item and leaves the inbox. I can see it in the ‘scheduled’ list - with no date, but it does not show up in the ‘next actions’ list.

My thought is that any scheduled item scheduled on or before today, should be in the ‘next actions’ list. Can anyone help me understand?

Although I cannot speak for the developers, I would be inclined to believe that the behavior you have observed (first paragraph) is a plain bug, and that their intention was to make it work as you described in the second paragraph.

For some reason, many apps do not have scheduled dates aka start dates aka tickler dates at all, and those that do have such dates always seem to assume that these yet-irrelevant actions will become Next actions at that stage, which is obviously the most common case, but it does happen quite often that people need to schedule actions of the Waiting For type, such as receiving a report from NN at the beginning of every month, or, that the will be re-processed and simply trashed or put into Someday/Maybe or reference. Developers often do not care about those use cases, so you usually need to work around this by setting these actions up for becoming Next actions and then inspect them on the day they come out of hiding and change them to Waiting (or whatever) - and keep doing that every day, week, month etc as a part of your regular reviewing routine. Usually this is quite simple, especially if the “new” actions are automatically focused and therefore easy to spot. GTD prescribes that these actions should be taken to the Inbox for processing, but I am only aware of one app (getitdoneapp) that does it accordingly. In my opinion this is even worse (even though it is purer GTD), because that forces you to change the vast majority of tasks from Inbox to Next. Other apps, e.g. Toodledo, have a start date that is entirely independent of the “status” (Next, Waiting etc), and this would be my preferred choice - it lets you decide in advance on which list you want the item to tun up on the tickle date.

Does anyone know if anything was found regarding this scenario? I had a task from Monday of this week with the same criteria as the OP that didn’t switch from Scheduled to Active. TIA!

I’m not sure why this is showing as Resolved. There doesn’t appear to be any resolution?

Unfortunately my lack of confidence following a few missed appointments have resulted in me heading back over to doit.im until things settle down a little (and the IOS app appears). I’ll keep popping back here as I really like the outline view but can’t risk missing repeating actions such as those in the original post.

I am also experiencing this issue. I’m a new user, just trying out GTDnext. This bug, and this thread (marked resolved??!) does not fill me with confidence.

Can the developer please address this question?

I am also experiencing this issue. I’m a new user, just trying out GTDnext. This bug, and this thread (marked resolved??!) does not fill me with confidence.

Can the developer please address this question?

Hi Brent - thanks for giving GTDNext a try. This thread is pretty old and behavior may have changed in the meantime I see you have open a ticket on this issue. I will go ahead and address your questions via the help ticket. Thanks!