Today (Saturday, 10/11) I created an action to repeat every two weeks on Saturday. A new action was auto-generated for today, good. But the next action is scheduled for Saturday 11/1, which is three weeks away.

Choosing to repeat every week appears to work correctly. But choosing anything larger always adds an extra week.

And is there a reason for limiting the repeat to a maximum of 5 weeks? I’d like to have option for more like 6 or 9 weeks.

Hmm… and when trying a monthly repeat, no matter what interval is selected (every month, every two months, etc.) the next action is always scheduled for the next month.

Thanks @pmd - We will look into this - Thanks for the report!

(Saturday, 10/11) I created an action to repeat every two weeks on Saturday. A new action was auto-generated for today, good. But the next action is scheduled for Saturday 11/1, which is three weeks away.

Hi @pmd in today’s build X.18 we have taken care of these issues. Repeating actions can be a bit tricky, so let us know if you see any other issues.

Hmm… only did some quick testing, but it appears the weekly repeating still does not work. No matter what weekly interval I select, the next event is always scheduled for the next week. For what it’s worth, this is with build X.19.

I’ll do some more testing and see what I can find. Thanks!

it appears the weekly repeating still does not work. No matter what weekly interval I select, the next event is always scheduled for the next week.

Are you changing the start date at the same time? The first event date will always be the closest date to now if you leave the start date showing today’s date. If you don’t want to start the repeating event from today, you need to change the start date to the first date the repeat should start. Does that make sense?

However, after selecting/deselecting random days and random intervals, eventually the Next Event will display correctly and will correctly reflect any future changes to the days and interval. And I haven’t figured out the correct combination of clicks to get things “unstuck”. Sometimes it seems just a few are necessary. Other times a whole lot are needed.

Another interesting tidbit: When creating a new scheduled task and using the default start date of today, the action appears in the Scheduled list, but there is no date associated with it. Not sure this has anything to do with the repeating problems. But maybe it would make sense for the default scheduled date to be “tomorrow” instead of “today”.

Maybe this is just a cockpit error and a misunderstanding how this should behave, but I’m still confused…

For fun I created a new repeating using the same parameters as above and got the same results (new action spawned today, next event for 11/15). So it seems consistent.

Maybe something that would help me is if instead of how identifying a single “next event” perhaps two or three or more next events could be identified.

Did a little more experimenting. Yesterday (Saturday, 10/25) I created 4 repeating tasks. Each with a start date of 10/25, scheduled to start on Sunday. The difference was the repeat rate: one is weekly, one is for every 2 weeks, on is for every 3 weeks, and one is for every 10 weeks.

As anticipated, each tasked spawned a new action on Sunday, 10/26.

What wasn’t expected is that the next event for all four tasks is identified as the following Sunday, 11/2.

Guess I’ll have to wait until Sunday to see what happens for each of these.

Any body else having trouble with weekly repeating tasks or it is just me?

Hi @pmd - I’m not seeing these issues, but will do some more testing on the repeated actions to see if I can find any new issues. If you can provide any step by step examples that would be helpful as well. We will get this figured out for you!

note - One thing that may help. If you are using the “every N” setting to skip weeks. Make sure you set the start date for the first date you want the task to repeat. For example, if on 11/2 I am creating a repeating task to repeat every other Monday, starting 11/10. I would first select the start date as 11/10. Then I would set the repeat to weekly, Monday every 2 weeks. The event start date should then correctly reflect 11/10 as the first event.

In the past, I have tried various start dates to see how things behave, and it gets confusing. But for my current tests, I always select a date in the future when the repeating action should occur. Here are the steps I follow:

In all cases the next event is targeted for “tomorrow”.

On “tomorrow” a new action is always spawned, as expected. But the new date associated with the next event isn’t always what is expected.

To test again, I just created 4 new repeating tasks to start tomorrow (11/5, Wednesday) with each repeating every week, every 2 weeks, every 3 weeks, or every 10 weeks. I’ll check tomorrow to see what happens and how it compares with the other tests.

I’ve been doing some testing as well. I setup up some repeating tasks on Sunday night. Some with repeating dates that should start this last Monday and some for next Monday (every other week) and they worked as expected.

Here are my test results:
http://screencast.com/t/0xhXmfYCt2 (not sure why I can’t paste an image into the forum right now)

As you can see I’m on the task that is supposed to repeat every other Monday. It show the next occurrence is 11/17. Which is correct.

Can you let me know if you are doing something different?
I will try some more tests. Could you post a screen shot of one that has the wrong event date? Thanks!

But here are some scheduled tasks that are not working correctly when the repeat is set for every two weeks.

----------
In this example, the fist action spawned on 10/26 as expected. Two weeks later would be 11/9. But as can be seen the next action actually spawned on 11/2 which was only one week later. And the next event is scheduled for 11/9, which again is only a week later, although two weeks from the original action.

Now the start date is a day before the first action spawned, so maybe that is contributing the the problem? 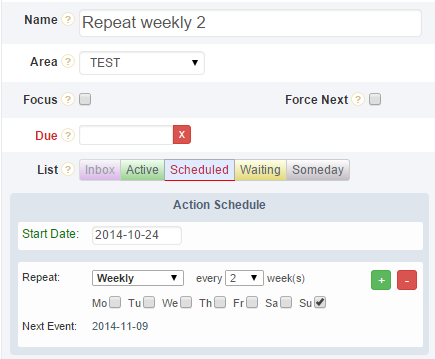 Again, the start date is a day before the first action spawned. But why the behavior of this one is different than the previous is a mystery. 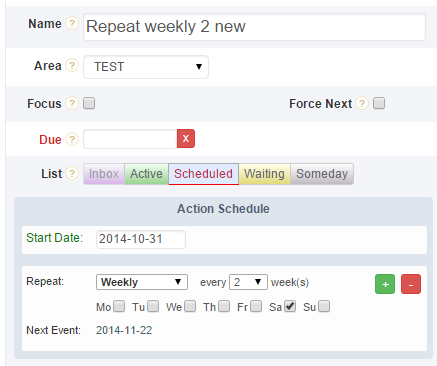 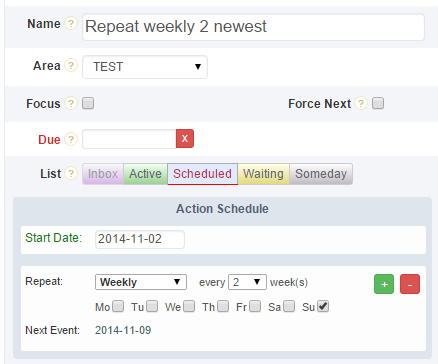 Of course, my last couple of tests seem to be behaving correctly. But I did notice something, If I pick a start date in the past, no matter what the repeat interval is, the next event is always the same in the upcoming week.

(Sorry, having trouble uploading images, but hopefully this is clear without pictures.)

I know you suggest to select a start day of when the first action should be spawned. But not knowing how the next event date is calculated and knowing a date in the future will eventually become a date in the past, curious if this might be a clue.

After several test cases executing currently, a new test I created yesterday failed. This time the two week interval seems to be ignored as the next event is scheduled for only one week later. 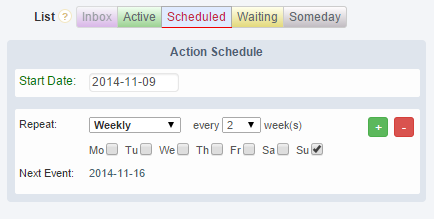 If there is any other information I can provide to help or if there is some sort of “test mode” I could enable to collect more data, please let me know.

I think I can definitively say weekly repeating actions are problematic when the action repeats on a Saturday or Sunday.

Any projection when actions that repeat every two or more weeks and spawn on a weekend will calculate the day for next action correctly?

What I continue to observe is:

Obviously, this issue should not be marked as resolved, but I’m not sure how to change the status.