When using JIRA and the Toggl chrome extension, Toggl will place a “Start Timer” link on the issue. It would be nice to have that ability on GTDNext as well so that I can easily use time tracking for each task that I work on.

Interesting idea. We have thought about adding time tracking in the past, but not really looked at using Toggl integration. Would you (and others) say that is the most popular time tracker to look at adding?

How would people like to see it integrated? If at all? Thanks for the input!

I think Toggl is pretty well-known. Of course there are a lot of time tracking tools but it’s quite popular.

When using the Toggl Chrome extension, under the options, I can enable integrations. Here you can see I’ve enabled the integration for atlassian.net (JIRA)

After doing this I get a “Start Timer” link in JIRA that gets placed there by the Toggl Chrome extension. 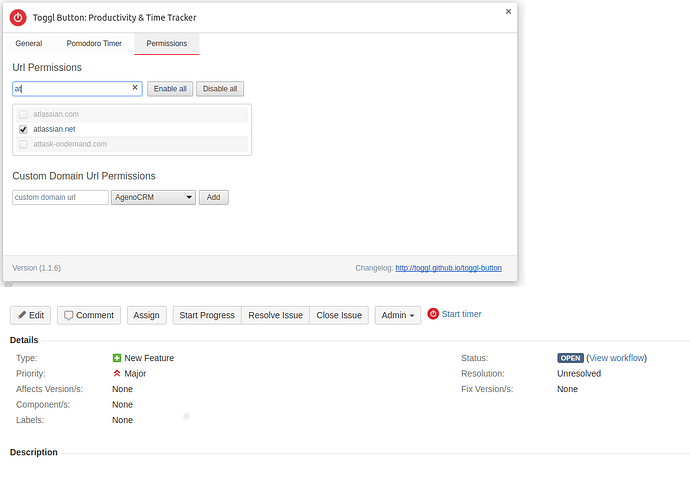 It’d be great to have something similar in the right-hand Details panel for an item and when I click Start Timer, the Project and the Item’s title are automatically set.

It looks like this article covers how the integration would be done https://blog.toggl.com/2014/11/adding-new-integrations-toggl-button/

I’m a brand new GTDNext user (an IQTELL refugee) and I’d like to second this brilliant idea–i.e., integrating time tracking (Toggl or not) into GTDNext–it’s something I’ve wanted a long time. I do use Toggl and have set it up using GTD. I basically choose a project and time that. In GTDNext we already have a list of projects, so one little icon next to the project that says, “begin timing” would be amazing. Easier than “toggling” back and forth between GTDNext and Toggl (or whatever time tracking device you’re using). Financially, this would be huge–people are willing to pay not only for task management apps, but also time tracking apps. Imagine if they could get these in one place!

Hi Russ and welcome! Thanks for adding your vote on this item. It’s a very interesting idea. We are pretty heads down on some other work right now, but when the opportunity presents itself, we will at least investigate how much effort it would take to implement this idea. Thanks!