My next actions page is now displaying duplicate actions… 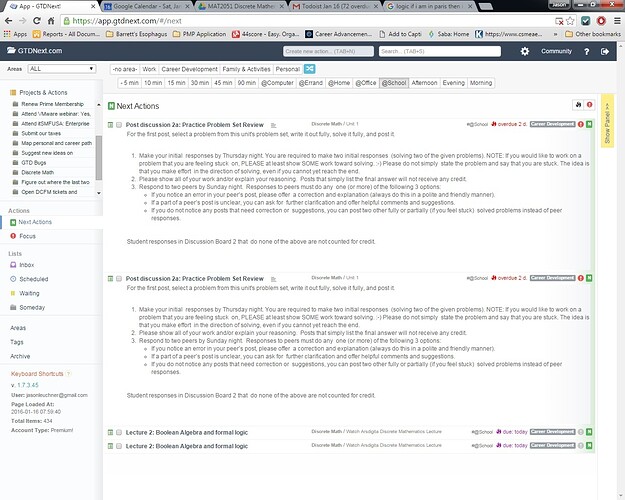 Does it persist after you hit the refresh button on your browser?

Yes, I refreshed a couple of times. This first time it went back to normal but then shortly after it began displaying duplicates again and a refresh did not fix the issue. Also, if I click the note icon, both next actions open in tandem. I should mention I am using Google Chrome browser. I’ll check again later and let you know if it still doing it.

Hmm - Very strange. We have seen where leaving two browsers with GTDNext open over night on two different machines can cause the next action list to duplicate. It is always fixed by a refresh and we’ve never been able to duplicate it, so we haven’t been able to nail down the cause and fix it. Do you have GTDNext open on more than one machine? Is it happening with all actions or just those few in the screen capture? thx!

I just checked and it’s back to normal.

I do have GTDNext opened on my iPhone too so maybe that is what caused it. At that time I also had the list filtered by context and my future tasks were not yet showing.

If it happens again I will try to document what I was doing to help you isolate it.

Thanks for the quick responses!

If it happens again I will try to document what I was doing to help you isolate it.

Thanks - this one has been huge pain to find repro steps that work reliably. A refresh always fixes it, but it is a big nuisance so would love to get this fixed.

I think I can explain what causes this - at least for me, anyway.

I am experiencing this on iOS, though just recently. It’s happening in Safari and Firefox. When I leave my browser “unattended” for awhile and open it again (logged into GTDNext the entire time), it refreshes the page, I then get the “Loading…” image, and all of my actions on the Next Actions screen are duplicated.

It doesn’t actually create duplicate actions, it just displays them all twice - and the sort order is not maintained. If I log out and back in, the issue is resolved - duplicates no longer appear, and my original sort order is restored.

Happens pretty constantly for me… It’s a bit annoying to need to refresh all the time, so I hope it gets fixed at some point.

Thanks for the report. Yes, we see a slightly higher rate of occurrence of this issue since we implemented the real-time sync.

We still lack a set of steps that can reproduce this issue at will. However, we are performing code reviews and investigations in an attempt to zero in on the cause of this issue so we can fix it.

As a heads up for those reading the thread for the first time. If you see duplicate actions, simply hit the refresh button on your browser and your view will return to normal. The duplicate issues are not actually in your database, it’s a screen display issue.

FWIW, I’ve seen this a few times already in three days’ use of the app. It is indeed possible that I may have had the Web app running on two machines at the same time when it occurred, although I am not certain of that.

OK, now it happened when I definitely did not have another copy running anywhere: 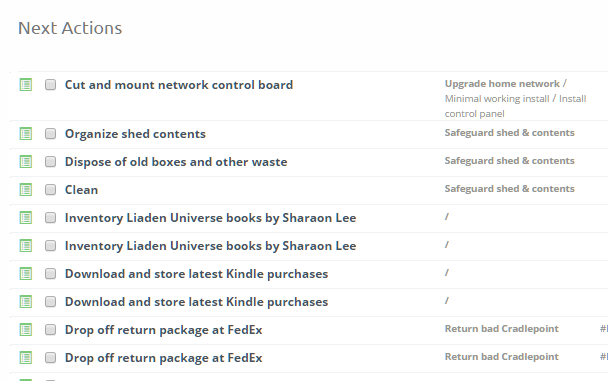 Notice the doubling starting partway into this next actions list. FWIW, I had two areas selected for filtering, no tags (not shown in this snippet).

OK, now it happened when I definitely did not have another copy running anywhere:

Thanks Dan for the report. Since we haven’t been able to duplicate this at will (and we’ve tried for a long time), we are going to take the very extreme step of re-writing the code for this function. Unfortunately, this will take a little while - sorry for the inconvenience in the meantime.

You’re welcome. It’s not a big deal, a refresh invariably recovers from the problem.

BTW, I became a paying customer today after hitting the limit of 200 action items. Very pleased with the compact and efficient UI.

BTW, I became a paying customer today after hitting the limit of 200 action items. Very pleased with the compact and efficient UI.

Thanks Dan! Glad to hear it!

Today’s release should address most, if not all cases of duplicate actions appearing in the next action list. Please let us know if you see it again. Let’s hope we can mark this as the day the duplicates died.

FYI, I’ve never seen it happen in Next actions, but i just saw the issue happen for me in Inbox. It’s not a big deal - just refreshed the page and it was fine, but it had duplicated all my inbox items (I had 3, and 6 showed up - each was duplicated). Thought you’d want to know.

FYI, I’ve never seen it happen in Next actions, but i just saw the issue happen for me in Inbox.

Yes, we’ve fixed the issue in the Next Actions and Focus Lists. The issue still exists in Inbox, Waiting and Someday lists. We are getting to each one of these lists and fixing the issue as time allows. It’s a bit time consuming to fix each list, so we’ve prioritized them based on usage. Thanks for the report!

OK, cool - like I said, it wasn’t bothering me at all, but wasn’t sure if you were aware of it.

HI all - In today’s release we fixed the rest of the lists. So as of today no list should ever show a duplicate item. Please let us know if you see this again! (You will need to hit the refresh button today to get the newest code) Thanks to all who reported this over time!