Better way to streamline Next Actions from Inbox to Projects & Actions List?

I don’t know if it’s just me, but I’m having a hard time tracking a project from the Inbox to the Projects List.

It’s not that huge of a deal, but when I’m on my Weekly Review and I’m pruning down my Inbox, I have to jump back and forth between Inbox and Projects List in order to flesh out my new Project’s Next Actions (so that it won’t just disappear and gets forgotten). I find it quite distracting.

I suggest that we should be able to create Next Actions under Inbox items, so that after we’re done fleshing them out, we can just directly send it to the Project List under the appropriate Area and Tags, all without constantly moving back and forth

This will really save a lot of time jumping back and forth and reduce distraction, in my opinion.

If anyone else have better ideas, please speak them out!

Thanks for asking! I’ve been meaning to record a tip video on this subject for a while and your question prompted me to do it today. In the below video I show how I process the inbox. I find doing it this way is very easy and fast. In a perfect world you would be able to select what project an inbox item goes to in the right panel area. However, that is actually a fairly involved feature that we haven’t created yet. In the mean time I think you will find this method pretty effective. Comments? 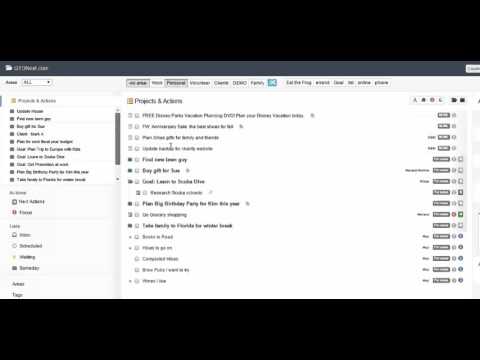 Thanks, the method works very well!
I hope you will share even more efficient workflow tips in the future!

EDIT:
Now that I’ve tried it more, I find it the results not always as clean as in the video. When you select the “No Area” and another Area, the Inbox items can easily be cluttered together with the other items. Especially when you have individual separate Next Actions in the Area.

It would be nice if we can have multiple windows and we can just drag drop Inbox items. But that’s probably asking too much for now

How can I add a feature request that might improve UX of this process? I’d like to request the addition of a button for “All Areas” rather than current method: a selection box which takes two clicks in a small target area and sort of, I don’t know, interrupts my brain. An “All Areas” button would just be a single click I’d use after processing my Inbox to sort of reset GTDNext to it’s default. (It could even take the place of the selection box on the desktop version - at least for me.) Thanks!

I find it the results not always as clean as in the video. When you select the “No Area” and another Area,

That is true if it’s been quite a while between times when you process your inbox…Hopefully this new method will give you incentive to do it more often and when that is the case, most of your inbox items will be on the top… The other alternative is to take a few seconds to drag all the inbox items to the top of your outline. Although I totally agree, that is an extra step and I dislike extra steps, as you probably do as well.

How can I add a feature request that might improve UX of this process? I’d like to request the addition of a button for “All Areas” rather than current method

You just did! We will discuss and see… we rarely want to use up extra space… so not sure this will make the cut. But we will discuss, thanks for pitching the idea.